Experiences and Cultural Atractions in Tanzania 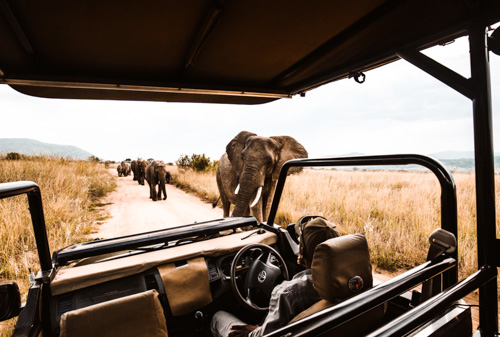 Tanzania trips offer an incredible variety of highlights. The Serengeti National Park and the Ngorongoro Crater are world-famous and offshore islands such as Zanzibar, Pemba and Mafia offer a perfect safari and beach combination.

Travels to Tanzania are impressive, as no other country in Africa can offer such a variety and large population of wildlife and incredible natural places

Browse through our platform to find your dream experience, or contact us to help you design your perfect Tanzania trip

The roof of Africa - Kilimanjaro has fascinated for centuries.

Make your dream come true and climb Kilimanjaro in Tanzania. With 5895 meters the highest and most famous peak in Africa. Although Kilimanjaro is almost 6,000 meters high, you don't need to have any mountaineering skills to climb it..

A good physical fitness, an average condition, a strong will and of course a bit of luck are sufficient to reach the summit.

The equipment depends primarily on the travel time, type of travel and destination. The assumption that it is always warm in Africa and that the sun always shines is deceptive. Especially in the mountainous regions, such as on Kilimanjaro, in the Ngorongoro area or in the Usambara Mountains, it can get very cold during the summer months.

For trekking trips and mountain climbs above 4,000 m (Mount Meru and Kilimanjaro) complete trekking equipment for high mountains is required, as well as warm clothing and sturdy shoes are essential. 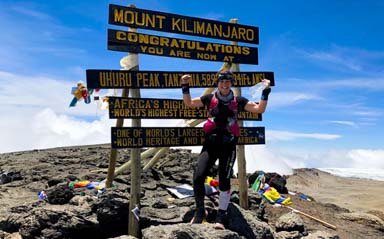 Peak of the Kilimanjaro 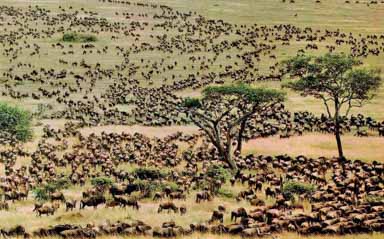 Every year at the same time it happens again: driven by the age-old rhythm of the life cycle, more than one million wildebeest, 200,000 zebras and 300,000 Thomson's gazelle set themselves in motion. They are accompanied by hungry cats of prey across the open plains and through crocodile-laden waters.

Their destination: the fresh grazing grounds in the north, where the species regenerates in a short time and around 8,000 calves are born every day, before the 1,000 km long and exhausting migration starts all over again.

The migration takes place periodically in a clockwise direction between the pastures of the Serengeti in Tanzania and the Masai Mara Reserve in Kenya - a distance of almost 3,000 km.

The Serengeti and Masai Mara belong to the same ecosystem. The animals, however, naturally know no national borders and move to those places where they find food and water. They often migrate in groups of up to several thousand animals, which travel together along the migration route. However, it is also quite normal that some groups deviate from the "normal" route.

Here is a brief outline of the Great Migration:

Within two to three weeks, over half a million gnu calves are born. At the peak of the calf season, up to 8,000 calves are actually born each day. The small gnu calves get up quickly and are integrated into the herd just as quickly - if they don't fall victim to predators such as lions or leopards.

This is the raining period and it can be difficult to observe the migration as during other seasons.

July-October: The crossing of the river Mara

To get to Masai Mara in Kenya and to the fresh grass, the herds have to cross the river. The crossing is one of the highlights of the great migration. Crocodiles lurk in the river, hunting for the many prey animals as they cross the river. A dramatic fight for survival begins.

After crossing the river back to Tanzania, the herds start again to migrate south through the Serengeti National Park.

Around December/January, the herds will be back approximately where they started their migration. The veal season starts again. 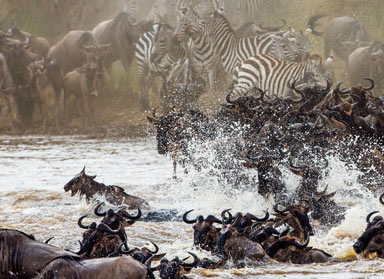 The crossing of the Mara River 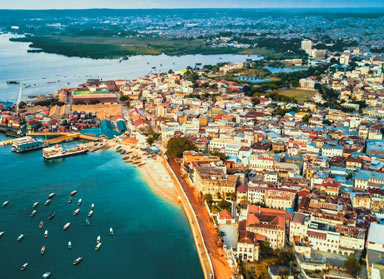 Go back in time in Stonetown

The weather-beaten walls of Stonetown tell the most varied stories of days gone by. Winding alleys, an anglican cathedral, Arabic houses, fairytale palaces and colourful markets bear witness to its ever-changing thousand year long history. Besides paradisiacal dream beaches Zanzibar has another tourist magnet with Stonetown. You should definitely visit some of the sights:

Arabic fort: The Arab Fort is located directly behind the Forodhani Gardens, the promenade of Stonetown. The fort was built in the years 1698-1701. Over the centuries it often changed its purpose and was used as a prison, market place or even as a tennis court. Since 1994, the large amphitheatre has been used as a venue for larger events.

Sultan's Palace: Stone Town, Zanzibar Sultan's Palace, which has housed the "Palace Museum" since 1994, is located immediately to the left of the House of Wonders. From 1834 to 1964 it served as the seat of government and residence of the ruling Sultan. Since the fall of the last Sultan Jamshid in 1964, the palace was used by the government for administration.

The magnificent rooms of the palace are filled with the gifts of former heads of state from all over the world. The life story of Princess Salme, who married a German businessman in 1868, is also interesting.

Anglican Cathedral: Old Slave Market, Stone Town, Zanzibar Anglican Cathedral of Zanzibar was built 1873-1880 by the "Universities Mission" of the famous David Livingstone and the British Bishop Edward Steere on the former slave market. When David Livingstone came to Zanzibar in 1856, he began - horrified by the inhumanity - to exert political pressure on the Sultan through influential friends, among others, who finally banned the slave trade on 6 June 1873. At the place where the altar stood, there is said to have been a tree to which the slaves were chained for sale. In the cellar buildings next door, you can visit the rooms of former slave quarters.

Book a stay at this remarkable place, as a perfect extension to a safari & wildlife itinerary. 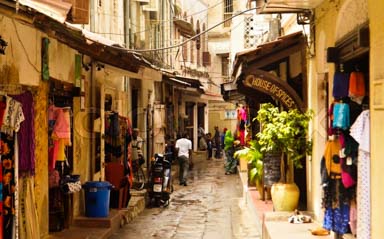 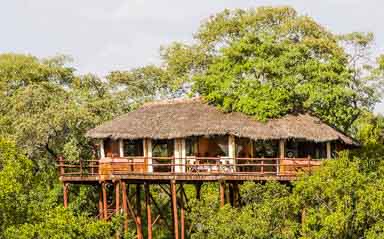 Sleep in the Treetops of Tarangire

The Tarangire National Park is with 2.850 km² the sixth largest national park in Africa. It is home to one of the largest elephant herds in Africa (and the largest in northern Tanzania) with up to 2,500 animals, 550 different bird species, tree-climbing lions and pythons! One of the landmarks of the reserve are the fabulous tree house lodges. Enjoy a night in one of the most special accommodations in Africa.

In the treetops, you will spend the night on 65 square metres, including an en-suite bathroom with an exotic double shower. The furnishings are adapted to the surroundings and local craftsmanship gives the interior an authentic flair. The private terrace overlooks the Tarangire National Park and you can listen to the wild sounds of the area. After a day in the wilderness, relax by the pool and in the evening enjoy an excellent dinner by lantern light - this is where children's dreams come true!

Swim with the Dolphins of Pemba Island

The island of Pemba enjoys far less attention than the world-famous main island of Zanzibar and has therefore been able to maintain a peaceful and endearing atmosphere between spice and fruit trees. Its original landscape with its irregularly shaped coast and dense mangrove forests are dominated by steep slopes and deep valleys in many places. Due to its four million clove trees, some of which are over 100 years old, Pemba is also known as the clove island of the Indian Ocean.

You can experience the intelligent, happy and playful sea mammals up close on one of our many island tours. But not only dolphins make a trip to Pemba Island worth your time. Fertile hills, smaller offshore islands and a number of excellent diving areas await the explorer north of Zanzibar and enable him to spend peaceful holidays in a lovely atmosphere.

Apart from swimming with dolphins, possible activities on Pemba Island include: Snorkelling and diving; Sailing; Safari on Mesali Island (marine reserve with a wide range of marine life; Trips to the natural rainforest "Ngezi Forest; From December to February: Whale Watching 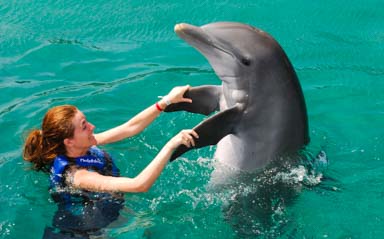 Traveler swiming with a dolphin in Pemba Island 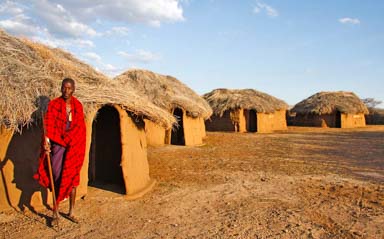 They immigrated along the Nile from Sudan and Egypt from 1550 onwards, bringing with them knowledge of agriculture and livestock breeding. In the 18th century, the Masai were feared as "wild barbarians"; their territories were shunned by Arabs, mountain peoples and Europeans alike. Due to drought, cattle plague, epidemics and civil wars the Massai lost land, livestock and prosperity in the 19th century.

The 140,000 Maasai in Tanzania lives mainly in the area around Arusha as well as in the Ngorongoro Conservation Area and in the Serengeti. Most of them already live as semi-nomads in a kraal (enk-ang) and only change places every few years, depending on the fertility of the landscape. Besides animal husbandry, the men now also earn their income as night watchmen or doormen (askari). More and more Massai send at least one of their children to school. During school time the young Massai wears jeans, sneakers and T-shirts and report to the tribal elders by mobile phone.

But still, you can come and visit an authentic Maasai village and take part in their cultural ceremonies.

A Visit to the Red Lake

The extreme north of the country is shaped and characterized by volcanoes. At the foot of the cone mountain Ol Doinyo Lengai lies the shallow, soda-rich Lake Natron in a dry, dusty scree desert. This region is considered to be a land of bizarre beauties such as the active volcano Ol Doinyo Lengai (which translated means "The Mountain of God"), the shimmering Lake Natron, the rugged East African Rift Valley and the endless sand and stone deserts.

The pinkish-red colour of the lake, which is only visible seasonally, is caused by unicellular algae, the spirulina. These algae, which are mixed with purple bacteria, are not only responsible for the partial colouring of the lake, but also for the characteristic colouring of the dwarf flamingos, whose natural habitat forms this otherwise hostile environment.

About 2 million lesser flamingos stay at the lake during the high season. Here the birds can nest and breed without fear of their hunters. Lake Natron is, therefore, one of the world's largest breeding areas for Lesser Flamingos. The elegant animals filter the water through their sieve-like beak and thus collect the algae contained in it. 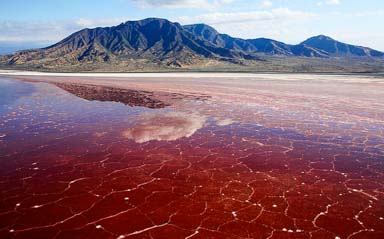 
Know before you go