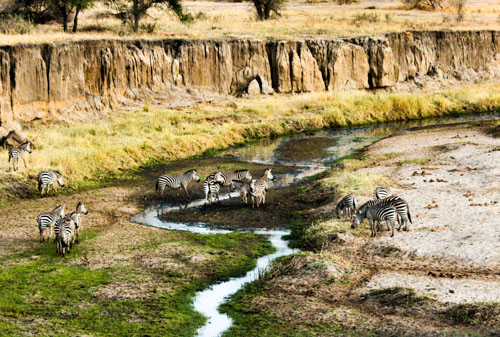 The country between Lake Victoria and the dreamlike spice island Zanzibar is characterized by golden savannahs, lush bushland and volcanic landscapes. Here lives a lively multi-ethnic population, consisting of hundreds of ethnic groups, in a community with an enormous animal wealth.

The endless grass savannahs of the Serengeti, for example, are the scene of huge animal migrations and ideal hunting grounds for leopards and other big cats. But also outside the migration this natural wonder has impressive things to offer: large herds of buffalo, groups of elephants and giraffes, several thousand eland, lyre and hartebeest, impalas and grant gazelles and much more.

Or if you descend on an adventurous track into the interior of the world's largest caldera in the Ngorongoro Crater, you will encounter one of the highest densities of wildlife in Africa. In the heart of the crater lies the white shimmering Lake Magadi, whose alkaline water is created by deposits of volcanic ash.

During the rainy season, many water birds, including pink flamingos, cavort in the lake and its tributaries.

It quickly becomes clear why almost every representative of East African wildlife can be seen in Tanzania. At the same time off the coast you will find tropical islands such as Arab-influenced Zanzibar and Mafia, offering magnificent beaches, ancient cultures, turquoise water and coral reefs.

Come with us, because Tanzania is always worth a trip! 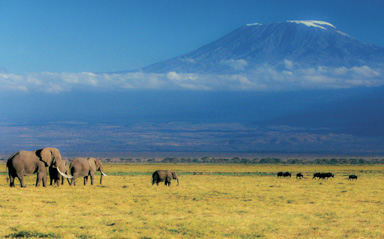 "Snow on the equator?" - nobody in Europe wanted to believe this when the German missionary, geographer and linguist Johannes Rebmann reported in 1848 about the eternal snow at the top of "Kilimanjaro".

It is the dream of all mountain enthusiasts. And rightly so. With its peak at 5895 m above sea level it is the highest mountain massif in Africa.

But the "roof of Africa" is not only the highest mountain in Africa, it is also the highest free-standing mountain in the world, as it towers above the surrounding savannah landscape by about 4,900 m! Become a part of this natural wonder of the world when you visit Tanzania with us!

In the warm evening light of Zanzibar, azure blue water washes around your feet while the fishermen's wooden boats slowly steered towards their home port to bring the catch of the day to market.

But there is more to Zanzibar than just ocean and beaches. Drive to Fumba in the south of Zanzibar. From there you will sail with a traditional dhow to the Kwale coral reef. In this area you can see shoals of bottlenose dolphins and humpback dolphins hunting for squid and other fish near the surface.

Or dive into the past on Zanzibar. Winding alleys, Arabic houses, fairytale palaces and colourful markets bear witness to Stonetowns' diverse history. 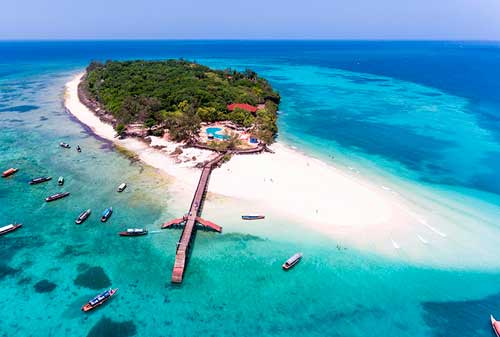 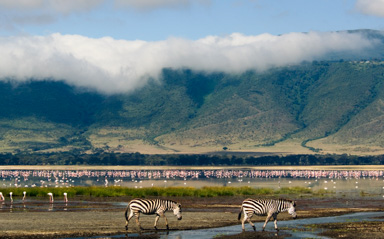 The breathtaking Ngorongoro Crater in northern Tanzania is the largest fully in-tact caldera in the world. Its extensive grassland steppe is home to over 25000 species of animals, including the highest density of predators in Africa and almost every other species in East Africa.

The nature reserve extends around the huge Ngorongoro Crater and has been a UNESCO World Heritage Site since 1979. Humans and our ancestors have inhabited this area for 3 million years, currently the Massai live there.

Ernest Hemingway was fascinated by the impressive variety of animals and plants in Lake Manyara National Park.

This natural wonder rests embedded in a breathtaking landscape. Surrounded by a narrow belt of green forest and overlooked by the majestic cliffs of the Rift Valley, it is only understandable that for Ernest Hemingway this graceful place was the most beautiful thing he had ever seen in Africa.

Apart from Hemmingway, Elephants in particular feel particularly at home in the evergreen groundwater forest. 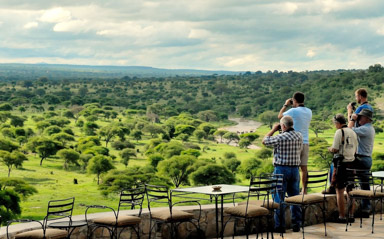 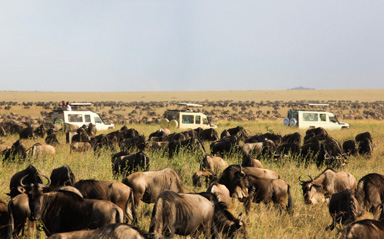 But even outside this spectacle, Tanzanian wildlife has so many impressive things to offer: large herds of buffalo, smaller groups of elephants and giraffes, several thousand eland, lyre and hartebeest, impala and Grant's gazelles.

Omnipresent experience in Tanzania's largest national park is the fight for life and death between predator and prey. The majestic lions rule on the vast plains, while the graceful leopards stalk through the dust-orange coloured acacia tree landscapes along the Seronera River and cheetahs hunt their prey in the south-eastern part of the Serengeti National Park. In addition, spotted hyenas and a variety of smaller predators such as the insectivorous aardwolf and the beautiful serval also live here.

The Udzungwa National Park is one of the most biodiverse regions on earth and is home to a high concentration of endemic species.

Though the National Park is not a typical destination for animal safaris, it is a magical attraction for hikers and nature lovers. An excellent network of forest trails provides easy access to various attractions in the park, such as the Sanje waterfall, which plunges 170 metres into the valley. 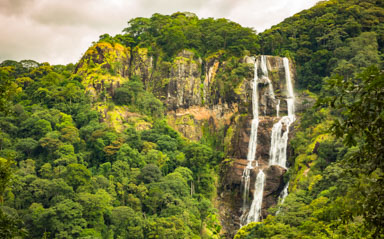 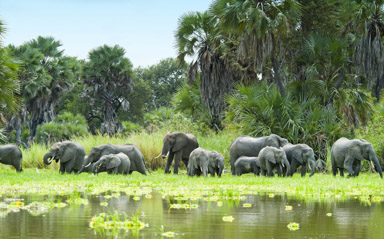 Welcome to the reserve with the largest elephant population in Tanzania!

This magnificent place is home to lions, giraffes, zebras, baboons, impalas and some rhinos, the largest elephant population in Tanzania (about 66,000 animals). Observing the animals is sometimes difficult due to the dense vegetation, but a good guide will certainly lead you to the right places.

Animal Life That You Will See in Tanzania

When visiting the different national parks, the animals can be observed in their natural habitat.

Every year at the same time it happens again: driven by the ancient rhythm of the life cycle, more than one million wildebeests set off, accompanied by hungry big cats, in 40 km long trains across the open plains and through crocodile-covered waters.

Their destination: the fresh grazing grounds in the north, where the species regenerates in a short time and around 8,000 calves are born every day, before the 1,000 km long and exhausting migration starts all over again.

When to go to Tanzania to see the Great Migration:

January - March: Herds stay in the Serengeti Plains, Lake Ndutu and Oldupai Gorge. Birth of thousands of gnuk calves and zebra foals within a short time.

May: After the end of the long rainy season, move on to the Western Corridor.

September - October: passing through the Seronera, Ikoma and Lobo areas; spectacular crossing of the Mara River.

November - December: Herds stay in the Kenyan Maasai Mara until early November. One-month return migration to Tanzania with renewed crossing of the Mara and Grumeti Rivers. At the turn of the year the migration reaches the southeastern Serengeti Plains again.

In the dry areas of Tanzania you will encounter most reptiles. You will find over 70 species of snakes, of which about 18% are dangerous and poisonous. These include the Python, the Black Mamba and the Puff adder. The latter is extremely poisonous and results in several casualties a year.

Geckos and shield lizards are widespread nationwide. Interesting are chameleons, which attract attention mainly because of their changing colour and their independently looking eyes. Their hunting technique consists of catching their prey with their lightning-fast shooting out tongue. Their survival strategy is perfect camouflage through optical adaptation to the environment, which makes these animals very difficult to observe.

And of course crocodiles are widespread in the water holes throughout the national parks. Who does not know the famous scenes that take place each year during the great migration, when Gnu's and Zebras fight for their lives during the river crossings.

For ornithologists and amateur birdwatchers, the South and East African savannahs, deserts and rivers are a true Mecca. An estimated 5,000 bird species live here - from tiny dwarf spikes to cormorants and Goliath herons, birds of all sizes and colours can be found. The different habitats have made them true survival artists, who have developed amazing skills and strategies to protect themselves from enemies on the one hand, but also to impress the opposite sex in order to preserve their species.

Not all birds in Tanzania are permanent guests, many species spend the winter in warm climates and travel long distances between different continents. Still others have come to terms with the large savannah inhabitants and live incredibly close to elephants, lions, buffalos or hippos without being eaten or injured. Sometimes they even peck vermin from the skin or teeth of the big animals.

To describe all bird species individually would lead too far, so here is a summary of the most popular smaller bird species and their characteristics.

Coral reefs are a world of their own: sea anemones in red and purple stand out as a splash of colour in the magnificent underwater jungle. Small fish swim through the lively world below the sea surface, as do sea turtles, rays and sharks. You won't go on holiday without a snorkel and diving goggles anyway? Then you should try snorkelling and diving around Zanzibar your next holiday. The archipelago off Tanzania is a true paradise for all those who can't get enough of the fascinating wonder world under water.

Besides the coast there is another highlight, Lake Victoria. It is the largest lake in Africa and the second largest freshwater lake in the world.

However, the ecological condition of Lake Victoria is highly endangered by the fast growing population, as well as by the clear cutting of the natural vegetation along the shoreline, the booming fish export industry, the introduction of various exotic plant and animal species, the disappearance of 50% of the native fish species (there were 400 species of cichlids here), excessive algae growth and the discharge of untreated sewage from industry and human settlements.

Tanzania is a country of extremes! The spectrum of vegetation forms ranges from lava rock desert to the eternal ice of the Kilimanjaro glaciers.

Two thirds of the country, with an area of 945,087 km², are covered by huge dry forests (Miombo forests) and savannahs. The dry forests form the transition zones between the savannahs and the dense tropical mountain rainforests in the southern and western regions of Tanzania - the Gombe, Mahale and Udzungwa National Parks.

The savannahs are essentially shaped by two manifestations, the endless grasslands and the tree savannahs. These are, as in the Serengeti, mostly covered with acacias, but also the baobabs (baobab trees) shape the landscape - for example in Tarangire and Ruaha National Parks.

With increasing proximity to the coast, palm trees dominate. They not only provide recreational shade, but are also of economic importance as food and for the production of fats, oils and soaps. The islands of Zanzibar and Pemba are home not only to coconut trees but also to numerous vanilla, cloves and other spice and fruit trees.

Between the islands in the Indian Ocean (Zanzibar, Pemba and Mafia) and the mainland, fantastic coral gardens have formed over thousands of years, in which a species-rich underwater animal and plant world can be found.